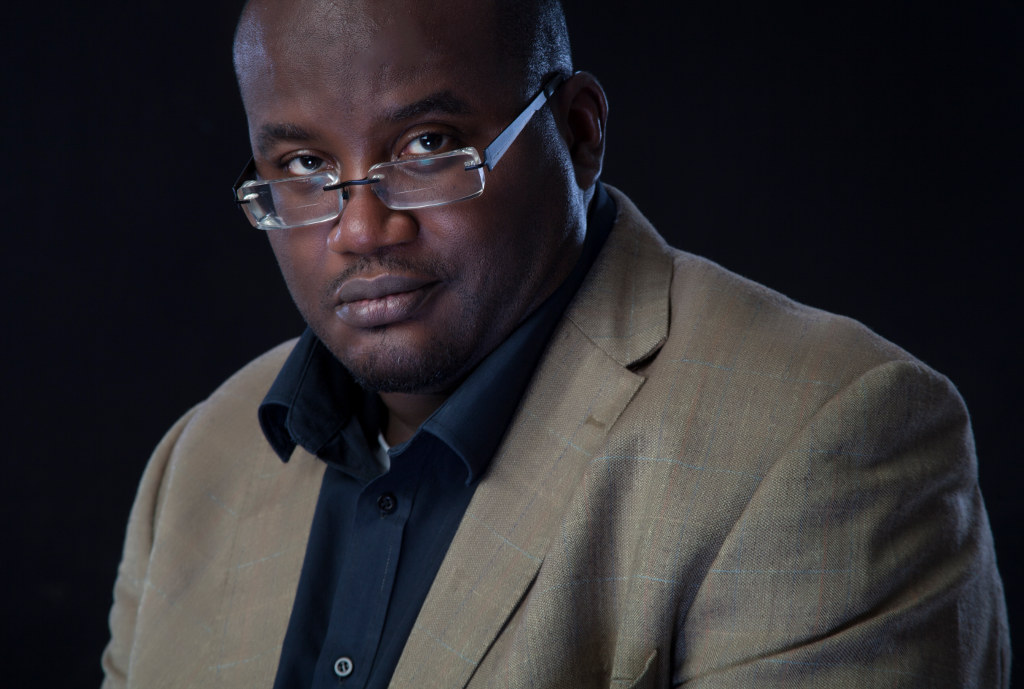 My name again is Tolu or Toluwalase and I am the author and researcher who researched and wrote an academic paper titled – English, the language of the gods.

English, the language of the gods.....which can be downloaded here is a discovery of seismic proportion whether officially acknowledged or not.

I discovered that by means of oracular consultation, ancient Egyptian Priests named Pharaohs and Queens of ancient Egypt using English or broken English. And I have thus written this paper that proves the point. Re: Romans 9:17.

I wrote the paper – English, the language of the gods.... and in it produced a list of about 250 names I decoded using a methodology I developed. Please take your time to read the paper in its entirety before drawing your conclusions.

I think I have to stress it was not that Ancient Egyptians spoke English. It was just that the Oracle used English as its means of conveying names to the Priests. This discovery is therefore NOT suggesting English or broken English was spoken at the time in Ancient Egypt rather the ORACLE happened to be the vehicle by which messages and names from present time were passed to the Ancient Egyptian Priest of that time.

I wrote 2 papers with the title – English, the language of the gods. The lengthier and weightier one of the 2 has my thoughts (“Authors thoughts” at the time of writing) And both are included to be down loaded on this website.

So much has happened since 2001 when the paper was written and now....for starters this website’s video presentation which was made at about 2017 would show me with a lot of weight on. This wasn’t as a result of poor eating habits but something more. Re: Psy-Technology.

Then again I appeared rusty and to have even forgotten much of the subject which I could say at the time of writing I was clearly at the helm of.

Forgive the stuttered awkwardness at the start of the presentation. I had been up against a lot tiresomely decking and diving for 16 years. Imagine a topic I had mastered in 2001,..........and then 16 odd years later with no contemporaries to rub minds with I had to deliver a presentation to a room full of curious yet sceptical journalists in 2016/17.

And even at that with a preliminary look at Egyptian lexicon on the internet the night before the presentation, I discovered to my surprise there were changes in words that shook my understanding and threw my hurriedly put together presentation slightly off balance.

There was the magical atmosphere that greeted/accompanied the deliverance of the messages and the music from my posts of the 31st January 2019 – 8th December 2020 on Facebook . The music and the messages all came together to communicate and reach people. Much information was dispensed there even though it began as an avenue to let off steam and let friends and family know what been going on and what’s to come.

I let people know there too of my vision and package for the people – Giant. And there were other papers I wrote and posted there – Africa Sapeur and Dr Yakub.

Seeing and reading some of my earlier posts on Facebook now does not have the same effect as some posts are now seen outside their place in time. A number of posts have been “mutilated” with pictures/photos removed while others have had Youtube music posts taken off. Then there was the constant and incessant interference by those who took out my content and even words as they felt it would diminish its impact. It’s not the same Guys, its’ not the same.

They did all sorts of things with what I wrote it doesn’t make as much sense as it once did. Way too much Christian music was taken off from my Facebook posts/pages for me not to recognise and know, the battle is spiritual and they are on the other side. The wrong side........

I have since “landed” and unofficially left Facebook. For me now Facebook is strictly a resource where people may use to reach me and me to reach others. And even at that its a stretch as numbers of contacts and messages (Messenger) do not go through anymore. It is what it is Guys, and we are living in the civilised West.

We have talked about the Facebook presence and now we are talking about my Projects in the offing and the other papers which I introduced there and included here, to be downloaded here.

Projects combining to form the “Giant” package are:

Other papers I have written that can be downloaded here are:

3. Dr Yakub, modern medicine and the age of Ra.

5. Letters to Brian (A Manager at Cygnet Lodge, where I was held)

I had been exposed to such gangriously ‘green’ ugliness associated with bad human behaviour and suffered so much pain as a result, I suspect the calculation is my ‘fire’ would now be sufficiently diminished or completely extinguished.

I reiteratively echoed - Hephaestus was the Greco-roman god that stole a ’fire’ from heaven. Can it now be said that that fire has been denied? I say – Nah, No way! No chance! I did say and I repeat - Small men are the bane of humanity. And so we shouldn’t give them any chance here.

These small men have to ‘work’ our families and ‘work’ us over before THEY feel comfortable with us. Money, threats and inducements/enticements were used to compromise ones family. It was all used here. It’s been 22 years now and they have had all the advantages.

The State here has been used and is trying to destroy me. The time, effort, resources and finances involved has been humongous and mind bogglingly unreal. For example I couldn’t even get a Solicitor here in London to answer my call without them willing to drop my calls or throw my case.

And in another instance my telephone contacts on my mobile phone were all problematic and not connecting so I wasn’t receiving calls or couldn’t successfully get calls through.

Hospitals here which are meant to heal unwell individuals in my case have been used as places to make me unwell as their staff have been guilty of colluding to ‘work me over’. In other words a variety of subtle despicable damaging exercises were employed and used in trying to induce among other things conditions like ‘thought disorder,’ anger issues, brain damage and provoke violent reactions so in the very least I may be classified/written off as unstable, insane or just plain ‘difficult.’

In retrospect, It is known there is nothing our people fear more than madness.......Personally I have never feared to go to the dark places genius leads....it is why I am the scholar par excellence and you are the bum/chum reading this....lol.....life eh lol...!

Seriously, jokes aside....I have presented quite a lot information which should be explained and in proper context. My first name in full which is a Yoruba name of Western Nigeria is Toluwalase which could mean God’s Sceptre of authority, is indicative enough.

Hinting I would say this Sceptre comes with a Melchizekian anointing which few people before this knew it meant combined – Warrior, King and Priest. I did state clearly in my Giant document that in the year 1998 as a devout Christian I got spiritually informed I was Eshu. A messenger god known to the people of western Africa/Nigeria and so quite frankly there is a lot to fear, admire or be jealous of here.

Further research lead me to the Sumerian Enki who I found to be one and akin with the Nordic Loki. Again I made a connection with the similarity of names:

Eshu is the messenger god ......associated with mischief and wrong doing among other things while Loki is taken as the god of chaos. My take on this is it all depends on which way you are looking at things from. Some things are subject to interpretation.

For example we talked about cash cancellation, currency re-evaluation, commodity re-pricing and overall system over haul. A lot of supposed chaotic upheaval here to arrive at universal order.... It’s all about perspective Guys....it’s all about perspective. Loki was taken as the god of chaos but in actuality he gave order or what’s that saying again ......you have to break eggs to make an omelette.....that’s exactly what’s implied here.

Other than that I suspect you will have to do some reading and importantly some thinking to catch up and catch on or else its all gogglegook crazy stuff here.

Again an anointing with as many and fascinating features attracts often the very base envious and jealous types. First it’s he may be mad, then he has to be mad then its if he isn’t let’s make him mad....which sadly is where I have been with the British public. It’s been all bitter ‘wishful thinking’ on their part. It’s been sour grapes......

...And then for the same supposed mad/crazy person to outdo all others with promising experimentations of rejuvenation, ala fountain of youth. Wow! I imagine it’s too much for the jealous ones to take in so they on one hand look in gleeful astonishing awe and on the other shamelessly whisper ‘madness’ to console themselves and then desperately try to hide and wickedly force it on me.

And yes, I found myself yanked out of my abodes to be whisked away and to be murdered by the Police at remote locations. There were 2 clear distinct occasions, I lie not. It’s true. You have got my mind.....

The “operations” to get rid of me have on the surface of it been multi – racial, multi – tribal/ethnic and multi – religious with even my family involved but the lord has been good to me and seen me through. Re: Psalm 116:8-15

Other than that I will say we live in the civilised West where I only received one email and no letters for my paper – English, the language of the gods. Hmmmmmm.

Re iteration – A little About me

I have spent my life equally on 2 continents - Europe (Britain) and Africa (Nigeria). And I can say I am just as at home eating bangers and mash as I am eating pounded yam and efo eriro soup.

When I am not pondering the state of the universe lol…in my spare time I love reading ( I could get lost in a good library) even though I am no geek. I also love boxing as a sport.……..( we, naijas are different. lol)

Other than being a script writer and researcher, Tolu is a qualified Graphic Artist and an IT professional. 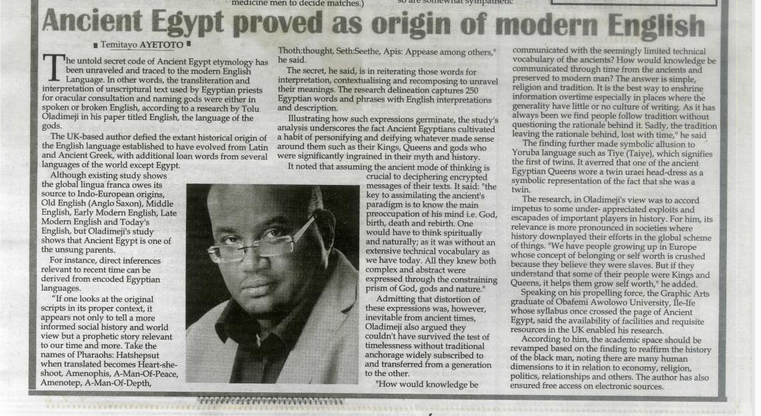 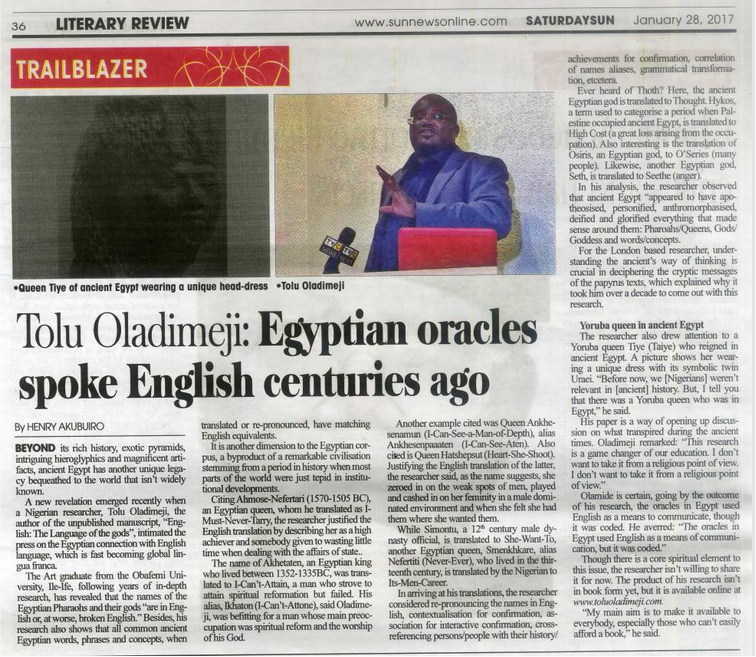 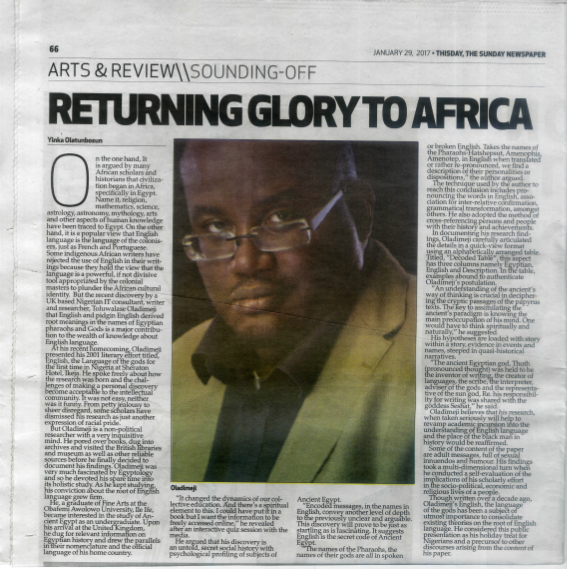 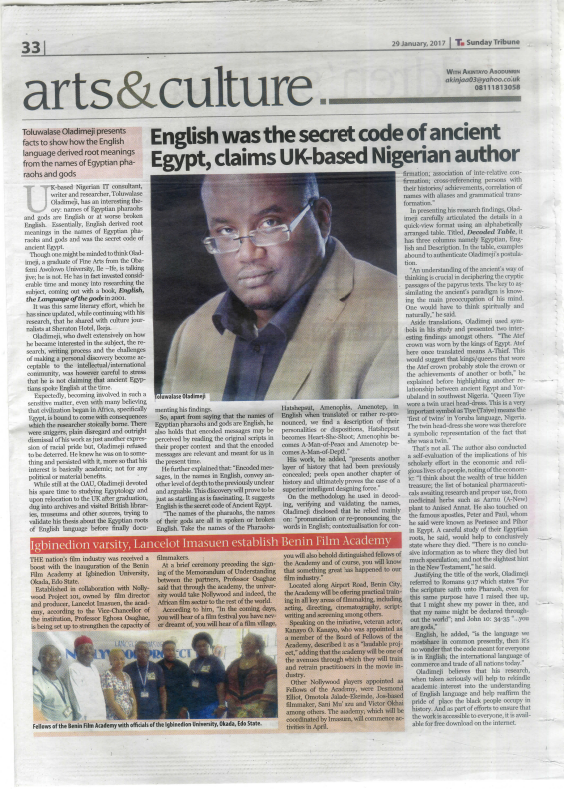 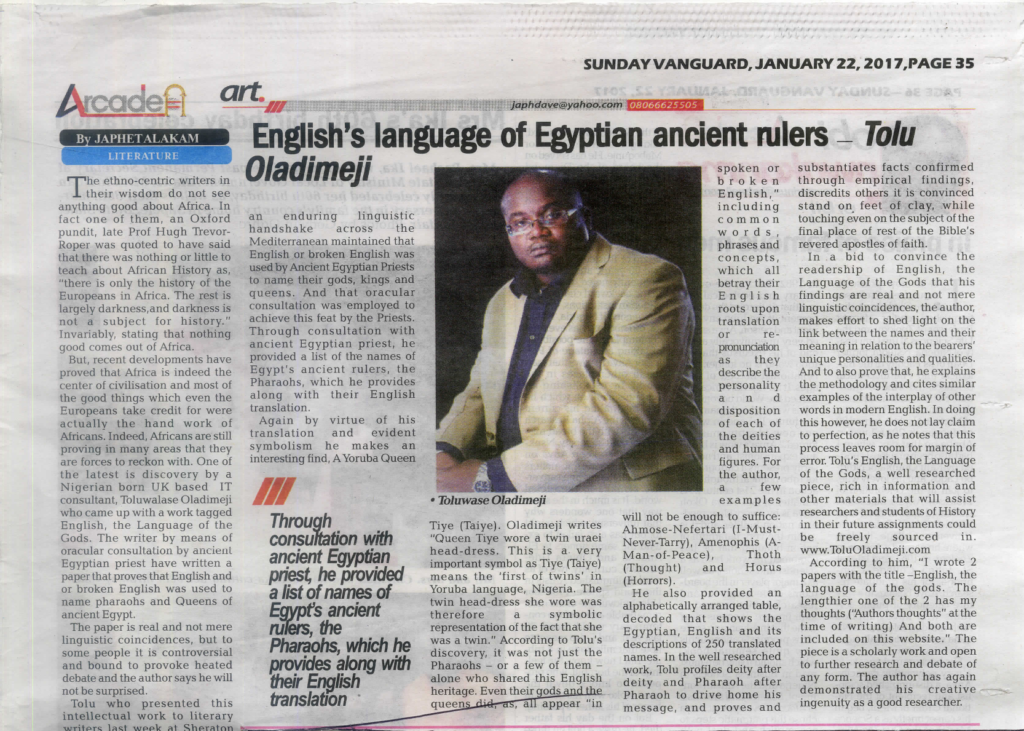 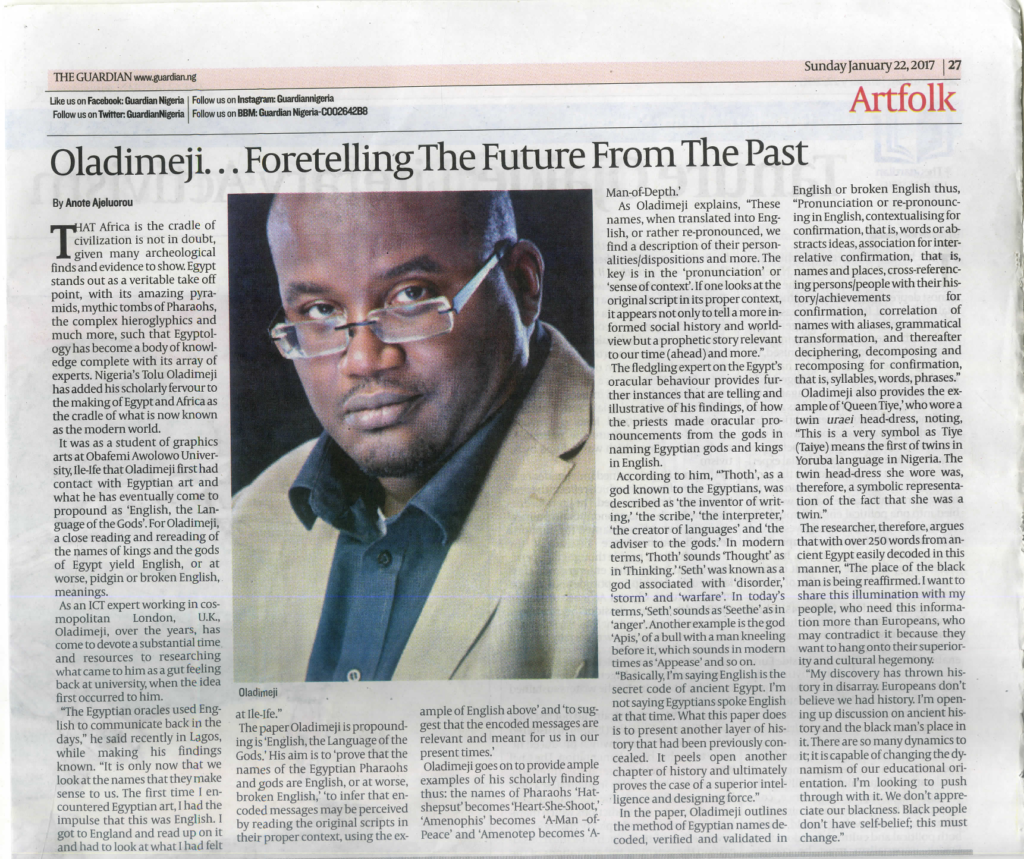 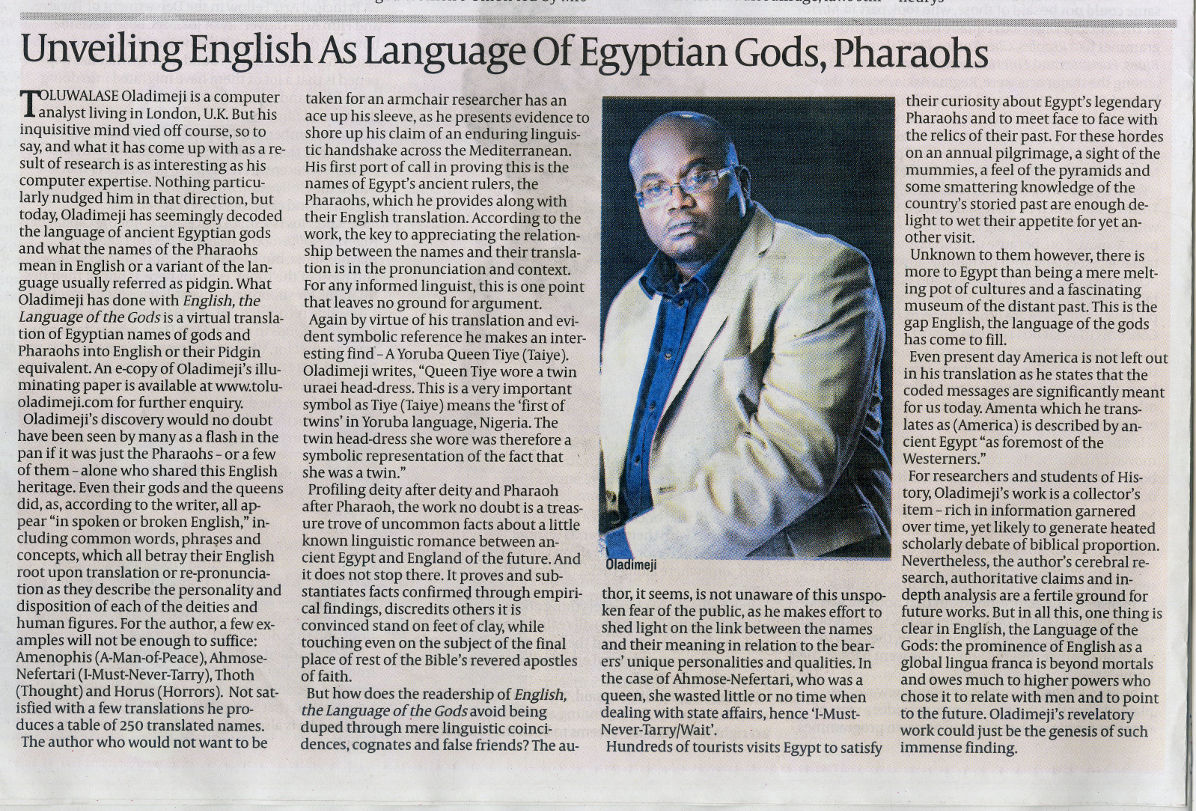 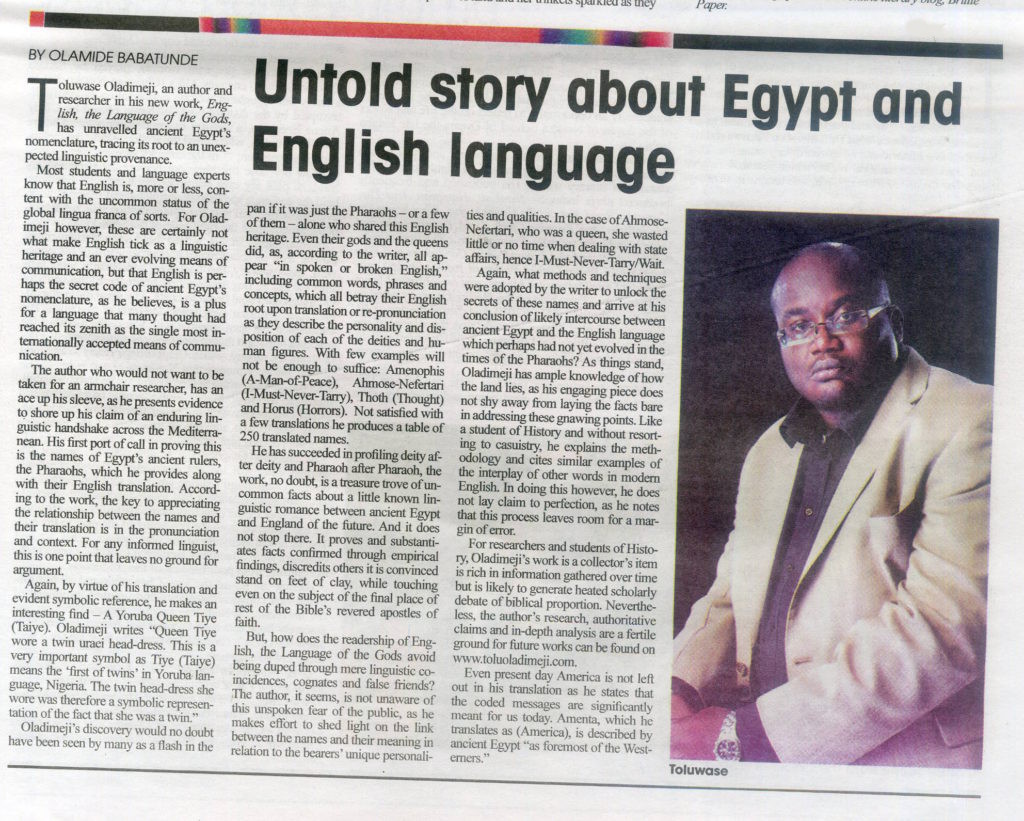 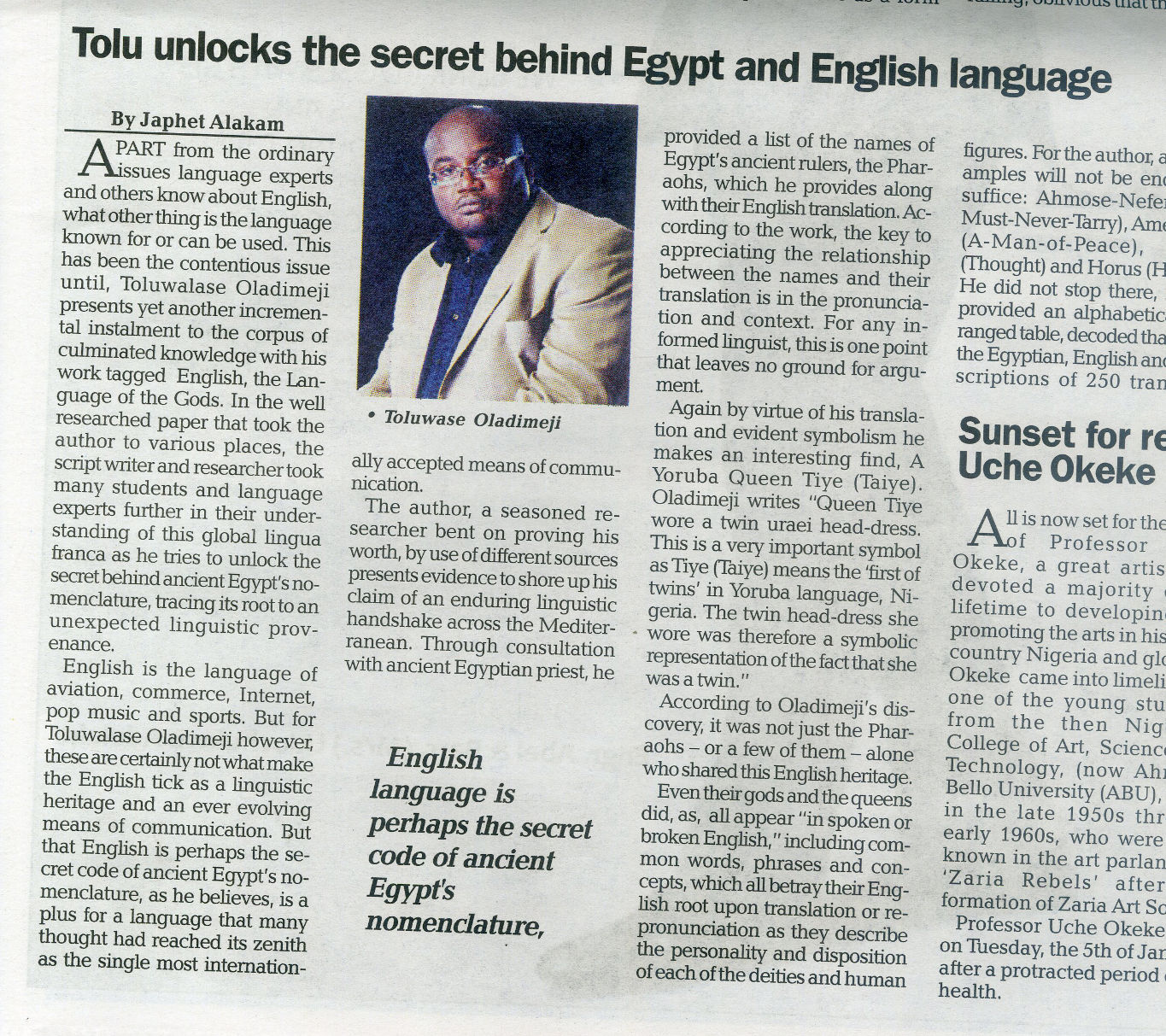 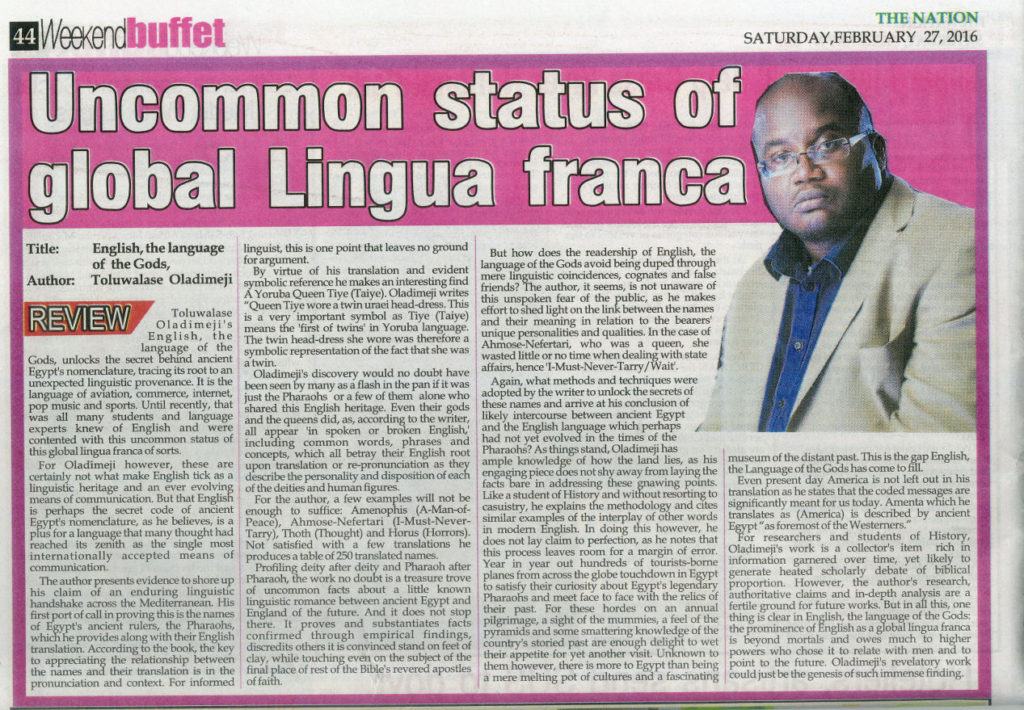 Please don’t hesitate to contact me for more information about my paper.